For a long time, Neel and I would recurrently drive by Humdingers, and Neel would comment how she wanted to try it. But I was skeptical. First of all, the name didn't inspire confidence. Second, the idea of a fish place located in a strip mall also didn't get me too excited. I imagined some greasy, poorly cooked fish place that was shaded out. But I concede. I was completely wrapped up in my own box, unable to perceive the true reality that was out there. It was like I was trapped in Keanu Reeves body, unable to stop my bad acting and unable to "free my mind."

Thankfully, like Morpheus, Neel was able to convince me to jump, and we finally went to Humdingers. Ok, I admit, that complete analogy was pretty bad, but I was looking for a reason to embed a youtube clip. Sometimes, you got to appeal to the masses and the masses love movie clips! Anyways, Humdingers wasn't at all what I imagined. So here we go. In print. Neel was right, I was wrong. Since giving Humdingers that initial shot, we've gone back numerous times, and I've enjoyed eating crow every time.
Humdingers is a cross between a fast food and sit down restaurant. A bit along the lines of Swanky's and Pei Wei. You go up and order at the counter and they deliver your food to you. Thus, the food is usually pretty fast getting to you, and the atmosphere is nothing too special. Definitely a chill, causal environment. But everything is nice and clean, with some convenient flat screen TVs to watch. But this place is not so much about the ambiance but the food. Humdingers is devoted to healthy and fresh, yet tasty food. The menu mostly consists of grilled fish dishes, along with chicken and veggies. You can read about the story of the owner's and their restaurant philosophy here. I love not only the idea/concept, but I love the execution too. It is also much needed considering our obesity problem in the country and especially in the south. And though Humdingers looks like a chain, it's not. Memphis born and raised, which is always a plus. 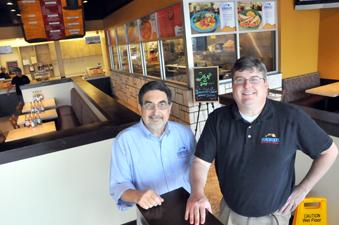 My most recent visit to Humdingers was for a work lunch. Besides their standard menu, they also have specials to change it up. This most recent trip, their special was a seared Ahi tuna and avocado salad. I was very tempted to get it. But instead, I opted for the more tried and true grilled tilapia entree. For the fish entrees, you get a grilled or blackened fish along with your choice of sauce (such as pineapple salsa, cucumber lime and yogurt, etc), rice, and a choice of side. The grilled fish they do is always very light and tasty. My tilapia was no different.
I opted for the pineapple salsa as my sauce. All their sauces are also very light and don't drown out the taste of the fish. They simply do a good job of complimenting the fish and adding that little something extra. I needed a pretty light sauce to go with my tilapia, and the pineapple salsa fit the bill, though I think I prefer the cucumber lime and yogurt sauce in general. For my side, I chose the grilled zucchini strips. I think this is the best side if you looking to be extra healthy. They are good but a bit bland. They could use a bit more seasoning. A bit tastier side is their black bean and corn salsa. It's a bit more filling than the zucchini but makes up for it in taste. Of course, for sheer taste, the best call is their sweet potato fries. They are really good and, as fried go, not to greasy or heavy. In fact, I think they are some of the better sweet potato fries in Memphis. The entree also comes with rice. I'm really not a rice fan. I usually try to avoid it, but Humdingers' yellow rice is not too bad.

A special shout out needs to go to Humdingers' fish tacos. I usually get this and I think it's great. You can a 3 taco meal where you pick a combination of either fish, shrimp, or chicken taco that comes with Asian slaw and Humdinger's special sauce. You also get a side. I love their tacos because the slaw and sauce don't overwhelm the fish. Moreover, their tortilla's are also very good and taste homemade. In fact, it's hard for me to think of any fish taco's in Memphis (except for Deli Mexicana) that outdo Humdingers'. As for which taco option to choose, I say opt for the shrimp and/or fish. The chicken's good too but just doesn't compare to the seafood options. Humdingers also offers wine and beer if you so desire. So, they've got some good options on the menu.

But Humdingers doesn't just come through on taste. It's the price that really puts it over the top. The tilapia entree or the fish taco combo is just $8.99! Pretty much everything on the menu is in that price range. So basically, you are getting a pretty healthy and light fish dish for a pretty good price. You leave not only feeling good in your stomach (without that feeling of I just put something crappy in my stomach) but also in your wallet. Thus, in its niche of causal, quick, economical restaurant places, Humdingers comes out on the top of my list. For this reason, we give Humdingers 3.5 stars.
I also take solace in the fact that others seem to agree with me. When I went at lunch, it was absolutely slammed with people who work nearby. It's not as busy at dinner, but beware you don't arrive at 12:00 and expect a short line. Humdingers has also opened a newer location in Cordova. I haven't been to that location yet but I'm guessing it's very similar to their East Memphis location.
Posted by Jon at 12:32 PM